I had a few problems getting up and running with docker-based gitlab-ci builds, so here’s a description of my setup. I’m using gitlab.com (not self-hosted) and their hosted CI at ci.gitlab.com BUT I am using private build runners on my own Ubuntu 14.04 server.

Took some pain to get here but I do like that I can own the hardware the builds run on.

In my typical Linux desktop I use ‘xbindkeys’ or my window manager’s built in keyboard shortcut preferences to set up an ‘open new terminal window’ keystroke (Super-Enter usually). When I moved to OS X for work last year, this was something I really missed, and it took me a while to find the simplest way to achieve it.

The solution is some simple applescript, which I put in ~/Library/Scripts/new-terminal.applescript

Then I installed the utility ‘FastScripts‘, at which point you can easily go into preferences and set up a global keyboard shortcut for your script.

Here’s another applescript I use to

Here’s a little Makefile I use with the Rails Pipeline we’re building at Harry’s. It builds .proto ProtocolBuffer definitions into .pb.rb Ruby classes using the ruby-protoc compiler.

To use, you would have ruby-protoc in your Gemfile. Set the GENDIR variable to point at the directory with your .proto files, then run make.

Here’s a little python class for interacting with the statsd admin interface. I wrote it for EnergyHub, where we used it alongside the nifty pystatsd module to clean up obsolete stats as we rotated our servers. We can delete the obsolete stats, in order to prevent gauges, for example, from reporting their last value until statsd restarts.

I miss having Vim around when I’m trying to develop a one-off script to run on Heroku. I found this plugin that installs vim but I thought it’d be great to just throw in busybox from the official binaries page. Here’s a modification to the vim plugin that does just that:

I just posted on the Harry’s engingeering blog about a mock gateway for Authorize.net payment APIs for use in Rspec unit tests and development Rails environments. We found that this sped up our test run at least 2X compared to using the Authorized.net sandbox server.

Another post over on the Harry’s engineering blog about testing asynchronous MooTools code in Jasmine.

I just released (as part of my work at Harry’s) an autoscaler for Heroku that uses Google Analytics realtime data to scale a Heroku app up or down. 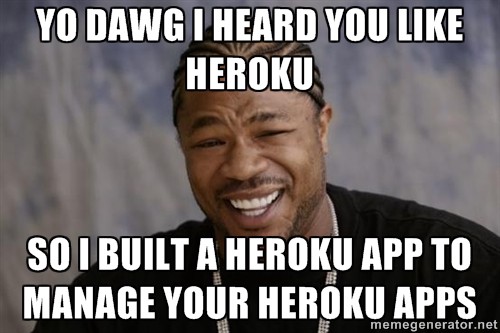 Dynosaur: the core functionality in a gem with command line client.
Dynosaur Rails: packaged into an easy-to-deploy Rails app with web interface for configuration and status.

More info in my post on the Harry’s engineering blog.

I thought I’d take another shot at reducing our build times. When we test our full legacy code, there’s a lot of slow integration tests involving mysql. I looked at using an in-memory database like H2-with-mysql-syntax but some of our code (e.g. table creation) is too mysql-specific. Next step: use a ram disk for Mysql. This is all based on Ubuntu 12.04.

Here’s a script that starts MySQL with the parameters to use /dev/shm for all files, and bootstraps in the root user and system tables. I have verified using iotop and iostat that nothing is written to actual disk with these settings.

As for performance? a full test run of our main data access library has gone from 4:11 to 3:41, about 11% faster. Not much really!